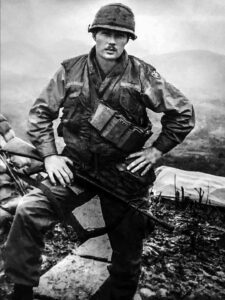 Episode 1766 of the Vietnam Veteran News Podcast will feature an unplugged conversation between the podcaster Mack Payne and Vietnam Veteran John Shoemaker. The conversation took place after the recording of the previous podcast episode about the battle at the cornfield.

In that episode John Shoemaker told about the challenging mission his platoon was assigned in the summer of 1970. That mission was to recon in force a mysterious cornfield that was discovered in the mountains a few miles from the base at Kham Duc.

At the time John was the 3rd platoon leader for B Company, 2nd Battalion, 1st Infantry, 196th Infantry Brigade, Americal Division. He has written numerous columns about his time in the War that appeared in the Metro West Daily News of Framingham, Massachusetts and other publications including the Wall Street Journal.

In the process of sharing more about his experiences in Vietnam on this podcast, John is contributing recorded presentations for the podcast. Recently he recorded a presentation about the mission to the cornfield of which the first part was published in the previous episode. First he describes the combat assault into the area and the battle that ensued.

It was such an engrossing conversation the decision was made by the podcaster to use it as a stand-alone episode. The term “unplugged” was used to describe it because it was unscripted. It is not a polished piece of audio but it is full of helpful insights about the trials and tribulations of a Vietnam Veteran in combat.

Listen to episode 1766 and discover more about the conversation between your podcaster and Vietnam Veteran John Shoemaker.

Hope you enjoy it.

This entry was posted in Uncategorized. Bookmark the permalink.