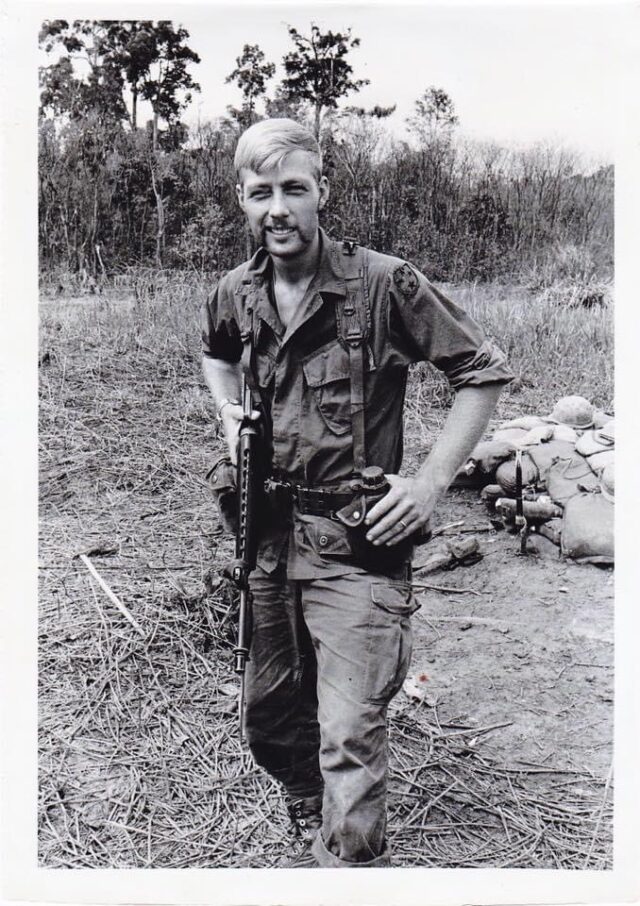 Episode 1767 of the Vietnam Veteran News podcast will feature the story about an ambush on the Ho Chi Minh Trail as told by Vietnam Veteran John Shoemaker. This event occurred in the summer of 1970. At that time John was the 3rd platoon leader for B Company, 2nd Battalion, 1st Infantry, 196th Infantry Brigade, Americal Division. He has written numerous columns about his time in the War that appeared in the Metro West Daily News of Framingham, Massachusetts and other publications including the Wall Street Journal.

Back in episode 1765 he told about the battle at the cornfield that took place the day before the ambush on the Trail. At the cornfield, John’s platoon routed a group of NVA troops that were a threat to the Fire Base at Kham Duc. After that action John was ordered to remain in place at the cornfield and prepare for more reconnaissance in force the following day.

The next day John’s platoon was joined by a special addition to his combat took kit. That special addition would later prove to be a live saver and a confirmation of the Biblical statement that “The Lord is my Sheppard.”

John’s story is exciting as it tells about the challenges his platoon had to endure as they hacked their way through triple canopy jungles in western Quang Ngai and Quang Tin Provinces.

He tells about how suddenly the jungle opened up and he and his men were standing on the infamous Ho Chi Minh Trail. He decided to further recon the trail and then as he described it all hell broke loose.

What happened next will make you appreciate the training and professionalism of the Americans who fought in that War.

Listen to episode 1767 and discover more about the ambush on the Ho Chi Minh Trail as told by Vietnam Veteran John Shoemaker.