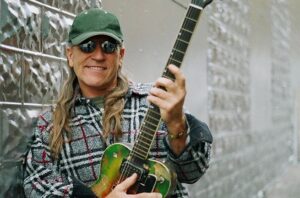 According to David Fricke of the Rolling Stone Magazine, “You can’t talk about rock in the 70s without talking about Grand Funk Railroad.”

Mark Farner is the reason why. As one of the founding members, lead singer, lead guitarist, and writer of 90% of the Grand Funk music, Farner has always been known as the energetic driving force on stage, the engine that pulled the original Grand Funk Railroad to the top of the charts.

His story and his imprint on music starts at Flint, Michigan and since 1969 from his humble beginnings and a blue-collar outlook, Farner is leading a global crusade for love and freedom and became a rock ‘n’ roll icon. He still to this day commands the stage with the same intensity performing epic hits that defined a generation –“I’m Your Captain (Closer to Home)”, “Bad Time”, “Some Kind of Wonderful”, “Foot Stompin’ Music”, “Heartbreaker”, “Locomotion”, “Mean Mistreater”and “We’re An American Band.”

Today,Farner is still going strong. At a young 72, he is also about as real as they get.He is a husband,a father and grandfather and in his fourth decade of marriage to wife Lesia. He is a family man, a man of God and a strong supporter of veterans and especially Vietnam Veterans.

In this episode Farner will talk about his performance of  “I’m Your Captain” at the 25th Anniversary of the Vietnam Memorial Wall and other topics including his “From Chile With Love” DVD project that is designed to provide financial aid to needy veterans.

For every “From Chile With Love” DVD sold Mark and his wife Lesia plan to donate $3.00 to the Veterans Support Foundation (VSF) towards the VSF transitional housing for homeless veterans.

CLICK HERE for a quick and easy way to purchase your copy of Mark’s “From Chile With Love” DVD. It is a win – win situation because not only will you be getting some great entertainment by Mark and his American Band but also you will be helping our veterans.https://markfarner.com/store/

Listen to episode 2024 and discover more about Mark Farner and his thoughts on music, Vietnam Veterans and life.